Iowa City, Iowa — A review committee — consisting of members of the Iowa City city council — has named CA Ventures as the preferred developer of a proposed student housing project at the former St. Patrick’s Catholic Church parish site located within walking distance of the University of Iowa.

Iowa City Economic Development Administrator Jeff Davidson told the Iowa City Press-Citizen that Core Campus, which has proposed a project called HUB at Iowa City, was named an alternate preferred developer, in case an agreement cannot be made.

The committee recently discussed project proposals from both CA Ventures and Core Campus for the property at Linn and Court streets.

According to the Press-Citizen, CA Ventures has offered $6.5 million for the almost 60,000-square-foot property, $1.5 million more than Core Campus’s offer.

The proposed project is being called RISE at Riverfront Crossings, and is a $102.5 million, nearly 560,000-square-foot project that includes two towers: a 15-story residential tower and a 14-story, 152-room hotel. The towers would include 127 one-bedroom units, 149 two-bedroom units and 44 three-bedroom units. Designs also include over 23,000 square feet of office space and 6,000 square feet of retail space.

Davidson told the newspaper that progress, pending approval from the city council, could begin at the site as early as this year. 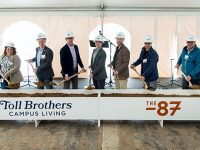 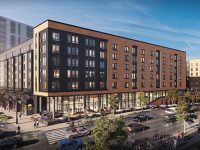 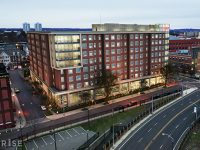