Many student housing properties scheduled to open by the start of fall semester are being delayed, some by days, others by a year.

August is the time when college students start moving into the housing they will occupy during the upcoming academic year. But with tens of thousands of new beds scheduled to come to market this fall, it was inevitable there would be some delays.

The volatile weather this past winter played a big part in some of the delays, especially in the East, Midwest and South. As hard as they tried, construction crews just couldn’t make up the time lost because of the snow, ice and bitter cold that dominated the climate in December, January and February.

Almost all of the delayed properties are scheduled to open at some point during the fall semester. Some probably won’t be available for move-in until the spring semester begins in January, and at least two won’t be ready until the 2015-16 year. In the interim, landlords or universities set up alternative housing for those who have already signed leases – some in hotel rooms, some in apartments and some in residence halls that were meant to be vacant in preparation for their eventual demolition.

Three delayed properties being tracked by Axiometrics seem to differ from the norm. The 608-bed Lux at Central Park near the University of North Carolina in Chapel Hill actually terminated 25 students’ leases in July, stating there was no way their rooms would be ready in a reasonable length of time, according to “The Daily Tar Heel.” The property is honoring the leases of all other to-be residents, providing hotel rooms, laundry service and transportation to campus.

The 480-bed Aggie Factory near Utah State University in Logan was scheduled to open this fall, but the primary investor died and the funding went into flux. A new lender was found in late July, and construction is scheduled to resume in September, Fox 13 TV reported.

Back in the Carolinas, the 121-bed Clemson Lofts near Clemson University in South Carolina will not open until at least September after the city of Clemson issued a stop work order in late July, according to local TV station WYFF. Officials told the station that the project didn’t comply with the Department of Health and Environmental Control’s storm water requirements. Students had to rush to find apartments or other housing in time for the upcoming semester.

Among the other delays discovered by Axiometrics’ student housing department:

Two new purpose-leased student housing properties near the University of Texas-San Antonio have been delayed and may not be open for months, “The Paisano,” UTSA’s student newspaper, reported. Affected are the 590-bed Tetro Student Village and the 496-bed Prado Apartments. Student lessees are being housed at hotels.

The 452-bed Riverfront Village near the University of Alabama has not received a certificate of occupancy from the city of Tuscaloosa, the “Tuscaloosa News” reported. The date occupancy will be permitted is unknown. Affected students are being housed in apartments and hotels.

Ball State University students were allowed to move into the 522-bed Village Promenade, but the Muncie, Ind., property is still not complete. Residents have not been allowed into the fitness center or pool, and a promised video screen has not been installed yet, according to WTHR-TV.

The 980-bed University Place, a public-private partnership serving University of West Virginia, has been delayed indefinitely because of weather. University officials said all students who leased there have been accommodated. Another fly in the ointment: Rival landlords have filed suit seeking to stop work on the project, claiming the city has not inspected buildings and claimed fees just because the university owns the land.

The 84-bed Villas at Barbaroo, owned by the University of Wisconsin-Barbaroo/Sauk County, has been delayed for “a few weeks” because of soil conditions at the site.

The 295-bed Taylor Hall at George Mason University, designed to be an honors college learning/living community, won’t be available for the 2014-15 school year, according to a student body news release. No reason was given.

The 60-bed Oak House at 12th Street near the University of Colorado in Boulder won’t be ready until mid-October. Property managers say last September’s flooding in the area set back construction, according to the “Boulder Daily Camera.”

The 715-bed Lakeside Graduate Housing property owned by Princeton University will be delayed, possibly until the end of the fall semester, because of weather delays, the “Princeton Alumni Weekly” reported. The University has offered moving and financial assistance, including waiving two months’ rent for students moving to Lakeside, and flexibility in moving dates. The delay forced postponement until 2015 of the 68-year-old Butler Hall residence’s demolition.

The hotel-dwellers are probably cheering.

Andi Simonpietri is a student housing research analyst with Axiometrics. Read the rest of her report on delayed openings at Axiometrics.com.

James Birkey: On the “K-Shaped” Future of Institutions of Higher Education January 25, 2023 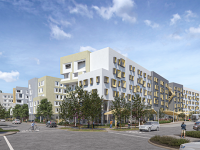