Columbia, Mo. — A 5-2 city council vote in favor of rezoning the Columbia Regency mobile home park passed Nov. 21. That decision will allow Austin, Texas-based Aspen Heights to move forward with plans to purchase the property and begin construction of a new student-housing complex.

The zoning regulations allow for a property with up to 936 beds. Aspen Heights in Columbia will consist of two-, three- and four-bedroom homes, each with its own porch and yard in a gated community, says Chief Marketing Officer Jason Sherman. Other amenities include a 10,000-square-foot clubhouse, an outdoor pool, a fitness center and in-house theater. Sherman says even more services and property features will be determined based on findings collected from upcoming campus focus groups at the University of Missouri.

The company has had its sights on developing housing at the university for the past two years. Construction will begin in summer 2012, and the project will be completed August 2013.

Aspen Heights met some opposition from Columbia-area student and activist groups concerned about shrinking options for local low-income housing as well as traffic and other issues higher-end student housing could bring to the area.

These groups, as well as some mobile home residents, also expressed concern about the property owner’s requirement to vacate on Feb. 29, 2012. Aspen Heights has been negotiating with residents for the past few months in an effort to ease the transition.

The move-out date has been pushed to May 31, 2012, for residents with disabilities or who have school-age children. All other residents must be out by the end of April 2012. Additionally, the company is offering approximately $300,000 in financial assistance for relocating the mobile homes.

“The facts in this particular situation are quite simple,” Sherman says. “Regency of Missouri was going to close in February no matter what. Because Aspen Heights plans to purchase the land, we feel it is an obligation based on our company values to meet the needs of these residents. Without Aspen Heights, these individuals would have been forced out in the dead of winter, and we found that to be unacceptable.” 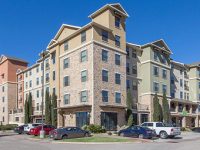