Anyone who has ever worked with teenagers and young adults can attest that these populations are sometimes hard to please. Many are still finding their voice, remain uncertain of their priorities, or don’t see the difference between what they want and what they need.

But architects do. Design professionals have become experts at accommodating both the desires and necessities of today’s residential student population. Throw in COVID-19, however, and priorities have shifted a bit. Some students prefer in-person classes, while others are comfortable working from their rooms. Some are willing to pay for high-priced amenities, while others would prefer to keep their housing costs as low as possible.

The design community has been taking all this in as it attempts to provide the away-from-home experience for the post-COVID generation. Below are some of the most significant trends they’re seeing.

As different as today’s teens and young adults may be from other generations, their top student housing priority remains the same.

“Like all real estate discussions, location is everything,” says Bob Keane, managing principal and director of higher education at WDG Architecture in Washington, D.C. “The closer students are to the campus core, the more successful they are as students.”

“We’re seeing an increasingly large preference to build in core pedestrian markets that are within or close to big cities,” he says. “This has resulted in a push to create more purpose-built student living communities that are walkable and bikeable.” 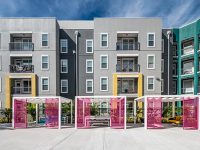 This includes The Parlor, which is being built near Texas State University and the Historic Market Square, a bustling shopping, dining and entertainment destination in downtown San Marcos. Set to open for the fall 2022 academic year, the 264-unit Greystar development’s first floor will include the community’s entrance, as well as a Target – a convenience that Keane says is becoming more popular with both on- and off-campus students.

“Many of today’s newer on-campus residence halls are mixed-use, meaning they include functions beyond residential spaces,” he explains. “They often include uses like academic, retail and/or dining, most often placed on the ground level, with residential spaces above. This can be a very attractive design feature — knowing you will be taking some of your classes or picking up a quick meal in the building you live in.”

Prince Frederick Hall at the University of Maryland at College Park was designed with convenience in mind when it integrated living-learning programs (LLPs). These programs allow students on certain academic trajectories to live and study under the same roof. The ACES Living Learning Program, for example, provides students with hands-on opportunities to learn about the field of cybersecurity while remaining engaged with a close-knit community of peers who are doing the same.

“The students have nicknamed the hall ‘P-Freddy,’ and have been known to roll out of bed, hop on the elevator, and attend class in their socks and slippers,” Keane adds.

Aside from location, walkability and convenient neighbors, amenities remain at the forefront of student housing — though not in the way they have in the past.

“The student housing industry has moved past the era of the amenity arms race with a shift toward quality over quantity,” says Benjamin Kasdan, a principal in KTGY’s Tysons Corner, Virginia, office.

What qualifies as a “quality” amenity at one community, however, may not at another. Though the University of California, Irvine, and San Diego State University may only be an hour away from one another, the residences’ priorities were different, Kasdan notes.

“That one ‘crucial component’ varies from campus to campus, and even from one community to another,” he explains. “For some campuses, like the University of California, Irvine, the study spaces are clearly the most important programmatic element and the emphasis on dedicated spaces increased in the later phases, like Plaza Verde, given the usage data from the earlier phases. At others, like San Diego State University, the fitness and recreation areas were the most important for the student residents at BLVD63.”

Campus culture can certainly influence which amenities will be most sought-after by nearby students, though some broader design trends are emerging. Boarman notes that theater rooms and computer labs, for example, aren’t as popular as they used to be with this generation of connected students. Instead, some designers are converting these outdated amenity areas into tech spaces with dedicated rooms for gaming, podcast creation and even social media.

Renata Lindsey, studio director and architect at Forum Architecture & Interior Design in Altamonte Springs, Florida, believes that emphasizing tools and activities familiar to the students ultimately helps them connect with their new environment. This is an important element, especially for those who are away from home for the first time. 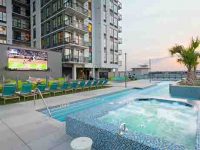 The Standard at Austin is a 17-story student housing community in Austin, Texas. Designed by Humphreys & Partners Architects (HPA), the 989-bed asset features more than 33,000 square feet of amenity space, including a pool deck with a large outdoor television.

“Students want to identify with their community, specifically, not just their school,” she explains. “They like to see features that give a project brand recognition, and that create an identity for the residents as a group. Items like social media walls, maker spaces, and podcasting and recording rooms give a project a unique view and create a sense of belonging to young adults venturing out in the world on their own, looking for a new social structure.”

With this in mind, Forum assisted on the interior design for Greystar’s new $70 million, 396-bed Union on Frank near the University of Alabama in Tuscaloosa. The development, which will open for the fall 2022 academic year, will feature a TV lounge and Twitch video game room and recording studio, among other tech-forward amenities.

Tech (and fast WiFi) may be essential to students nowadays, but that doesn’t mean good, old fashioned in-person amenities have gone by the wayside. Brian Ward, director of design at Niles Bolton Associates in Atlanta, notes that resort-style amenities that add an air of luxury to the student living experience are still as popular as ever.

“Hospitality design has influenced the programming and layout of some of our off-campus or near-on-campus projects,” he says. “These trends include bright, two-story lobbies that double as lounges and hang-out spaces; pool courtyards on top of structured parking with resort-style amenities and furnishings; and rooftop lounges with more opportunities to take advantage of views and unique perspectives. These all sell well to both parents and students.”

Amenities that incorporate outdoor space are also of prime importance, thanks, in part, to the pandemic. Kasdan points to the flexible rooftop space at Phase II of Currie Hall at the University of Southern California as one example of this. Ward notes his company is also experimenting with different ways of bringing the indoors outside.

“We are exploring some outdoor fitness ‘barns’ in these COVID times,” he says. “We’re thinking through how to evolve the areas where many gather in smaller spaces. Obviously, this is more advantageous in warmer climates.”

Then there is everyone’s favorite furry friend to consider. Though pets aren’t necessarily considered a “necessity,” Greg Faulkner, president of Dallas-based Humphreys & Partners Architects, notes creature comforts like these can play very well to the resident population.

“Dog runs and dog washes are amenities that sell as more and more students are bringing their pets,” he says. “The reality is, fulfilling the ‘want’ normally costs more, but if there is a rent premium to justify the increased cost, then it is better to go beyond and provide the ‘want factor.’ This may also help to shorten the lease-up period.”

COVID has also brought new meaning to the term “public-private partnerships” within student housing. Yes, traditional P3s still exist and are more prevalent than ever, but this moniker can also be used to explain students’ relationships with their rooms and a community’s social spaces.

“The pandemic has taught us a lot about these communities and their unique conditions,” Lindsey says. “It has shown us that both isolation and safe social gathering are equally important in a variety of degrees.”

The option for privacy has gone in two directions post-COVID, as Ward explains.

“We see both bathroom parity as the expected industry standard option and the increasing option of a double-occupant bedroom as the more cost-friendly alternative for some,” he says.

Jason Lutz, senior associate at Kitchen & Associates and co-leader of the firm’s student housing group in Collingswood, New Jersey, adds that the fallout from COVID is still being felt, meaning it’s difficult to tell if a few of these trends are here for the long haul.

“If you asked me in November if COVID had impacted a student’s desire for privacy, I would have answered yes,” he says. “But now there’s actually a renewed emphasis from students to get out of their bedrooms, be social and fully integrate themselves into the college experience. Private bedrooms and bathrooms are still in demand, but students really want well-designed and engaging community spaces and common areas where they can spend their time.”

For now, at least, the pandemic mindset will continue to place an emphasis on health, wellness and flexibility. Many study areas, for example, now include the ability to accommodate large groups or break up into private study areas. Fitness centers have also grown in popularity. Literally.

In terms of layout, Keane notes today’s in-demand student housing complexes can foster a sense of community based on the interior organization of spaces.

“Successful buildings include dynamic amenities like cafes or other retail, dining options, outdoor courtyards and activated entrance plazas,” he says. “Buildings have a better vibe when the primary interior communal spaces are organized and located in a way that connects them to the building’s primary circulation spaces, outdoor courtyards and green spaces. These connections to daylighting and high-traffic areas create a positive, healthy, see-and-be-seen environment that encourages social engagement, student success and retention.”

For all the conveniences, luxuries and creature comforts, Kasdan adds that sometimes subtle touches can make all the difference in the marketability of a building. This is especially true in urban metros and dense college towns where competition may be fierce and students have numerous options that offer the same amenities, he says.

“Instead of a particular design element or style, authenticity of materiality, public art and thoughtful contextual references will go much further than a more superficial or derivative design,” adds Kasdan.

This article was originally published in the March/April 2022 issue of Student Housing Business magazine. To subscribe, please click here. 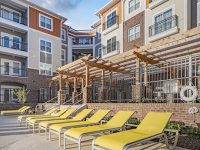 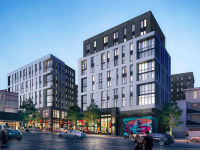 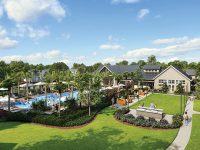