New York City may be America’s largest college town with over 500,000 full- and part-time students enrolled in 110 major institutions. These numbers have swelled as the likelihood of finding work during the current recession has kept more students in school for longer periods of time. As a result, New York’s perennial housing shortage for students and faculty has gotten worse, potentially threatening the quality and competitiveness of its educational institutions.

In order to meet their housing needs, colleges and universities have had to become creative. Partnerships with private developers experienced in negotiating the labyrinth of public approvals and construction regulations have become an effective way to deliver a project for many schools. New York University, Columbia University, and the School of Visual Arts, among others, have all recently opened new dormitories by partnering with experienced New York City developers. The student dormitory and faculty housing recently completed for Barnard College, at 110 Cathedral Parkway in Manhattan, exemplifies this approach.

Designed by RKT&B Architects and developed by Artimus Construction, Cathedral Gardens takes full advantage of its site, zoning, and economic opportunities to create a facility that serves the needs of not just Barnard College, the prestigious college for women, but the local community. Artimus has delivered several turn-key projects for Columbia University during the past decade. They have also fostered a positive relationship with the community and New York City through the successful affordable housing projects developed and built together with RKT&B. This combination of skills proved advantageous in creating what is believed to be one of the first multiuse college dormitories in the country. It uniquely combines 92 beds of student housing, 26 units of faculty housing, 25 affordable apartments, and a nonprofit day care facility.

The site is a 20 minute walk from the Barnard campus just south of Morningside Park.  The large corner lot is unusually shaped and wraps around an existing building. Its odd configuration, with three street exposures, worked to the program’s advantage by helping to cleanly segregate the various functions of the building.  The main entrance to Barnard’s portion is on Manhattan Avenue while the private residential entrance and day care facility are around the corner on 110th Street (Cathedral Parkway). A large south-facing landscaped court on 109th Street functions as a community garden for both the building’s residents and the surrounding neighborhood.

Barnard wanted to fill a shortage of student beds and to offer high-quality accommodations to future faculty. The new building provided the opportunity to fill both of those needs in an unconventional way. In keeping with Barnard’s liberal social philosophy, the student and faculty units are mixed together on the same floors rather than segregated on different floors. This novel approach has students and faculty sharing not only elevators and hallways but also common spaces such as the laundry room, lounge, and terraces. The building encourages more spontaneous interaction within the Barnard community, which was the stated desire of the college at the onset of the project.

There were architectural challenges inherent in mixing so many uses in one 110,000sf building. In addition to physically separating the main entrances the mechanical systems are completely independent for the college, the private residences, and day-care components. The structure was carefully layered both vertically and horizontally in order to do the seemingly contradictory, create a separate identity for the various uses while sharing architectural components such as corridors, stairs and elevators to achieve maximum efficiency.  The college dorms and faculty housing occupy floors two to nine while the private residential tower takes advantage of park views on floors 10 to15.

The dormitories were organized into multi-bedroom suites of up to six students, each with a large bathroom and kitchen. This approach maximized bed efficiency while still providing the students with a high level of comfort. Sound insulation of dormitories was a critical component of design and insured the well being of inhabitants. The faculty accommodations are conventional one, two, and three bedroom apartments that are spacious by New York City standards. Consideration was even given to design the utilitarian spaces in a way that would enhance social interaction. The laundry room for instance, rather than be buried in a basement, was placed on top of the 10th floor roof next to a terrace with spectacular views of the city and Morningside Park.  As expected, it has become a favorite hang-out among the residents.

Cathedral Gardens represents a public-private partnership of the highest order. The property was purchased from New York’s Department of Housing Preservation and Development by Artimus, allowing the developer to offer below market rate apartments to the neighborhood and in turn use the extra floor area ratio for college housing.  In an environment where scarce New York real estate must be developed to its highest and best use, this development can be seen as a model, both economically and architecturally, of how to satisfy a diversity of needs. 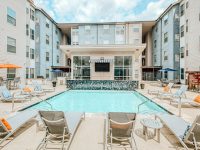 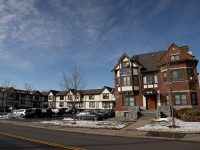 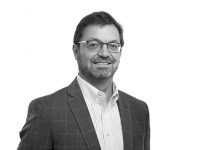 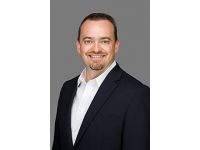 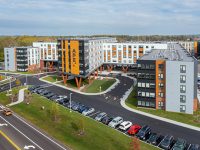 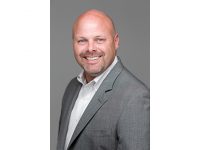